We have considered in this article only the tools that provides a load testing service that we define as the ability to simulate the access by multiple users on a defined time period. We will not mention tools that provides just a one-time assessment of your application performance, giving information such as the time needed to reach the server or to load the JavaScript library. We list also only the providers of free long term load testing services and not the vendors that offer only a limited time one time trial account. If you know a tool that is currently missing from this list, please use the contact form to let us know about it and we will update this article.

Each free service comes with its limits. In the case of web load testing, they focus on the following criteria: the number of virtual users, the duration of the tests, the number of tests and the ability to test from multiple geographical locations. Some vendors put explicit values on each of these items, but other work with a credit system that you can apply to multiple configurations. In this last case you might be able to choose between a long test with few users or a short test with many users. Some services will also put a limit in the number of days that the test reports will be kept.

Besides these limits, you will choose the free load testing account from the provider that is suited for your technological needs that can stretch from the ease of use if you are just starting your load testing journey or its capability to understand the specificity of your applications.

Blazemeter is at load testing platform that lets developers focus on developing. You can simulate any user scenario for webapps, websites, mobile apps or web services with a tool that 100% compatible with Apache JMeter. You can scale from 100 to 300,000+ concurrent users using realistic visitor behavior and browser simulation.

JAR:Load is a cloud-based load and functional testing service that uses real web browsers to simulate load. AR:Load can be deployed for multiple geolocations at the same time, allowing load to be geographically distributed. The free trial does not expire.

FrugalTesting is an online tool compatible with JMeter that provides services related to load testing and performance testing for web and mobile applications. It allows launching thousands of concurrent users from multiple geographical locations with bandwidth simulation too. You can import any JMeter JMX project file in FrugalTesting and export it anytime.

Limitations: registration provides 5 credits/month.. With one credit you can test with during 10 minutes and 50 browsers.
Web site: https://www.loadbooster.com

Loader.io is a free load testing service that allows you to stress test your web-apps/APIs with thousands of concurrent connections.

Load Focus is an online cloud-based service that allows loading test and monitor your web sites. LoadFocus runs in the browser and allows to realistic scale load tests up to 100,000 clients per test from multiple regions around the world. You can choose between different test scenarios for a better simulation of the users accessing your application. Tests can be scheduled to run automatically at specific intervals of time.

Load Impact is an online solution that provides simple yet realistic load testing. It simulates traffic exactly how it would happen in real life and can generate load from up to 10 different locations simultaneously.

LoadRunner is a software testing tool from Micro Focus. It is used to test applications, measuring system behavior and performance under load. LoadRunner can simulate thousands of users concurrently using application software, recording and later analyzing the performance of key components of the application. LoadRunner simulates user activity by generating messages between application components or by simulating interactions with the user interface such as keypresses or mouse movements. The messages and interactions to be generated are stored in scripts. LoadRunner can generate the scripts by recording them, such as logging HTTP requests between a client web browser and an application’s web serve. LoadRunner allows integrating load testing into your development tools: IDE, jUnit, nUnit, Jenkins, Selenium and Microsoft Visual Studio. Starting with version 12.55, you can run your JMeter scripts and integrate JMeter with additional script types in any performance test. 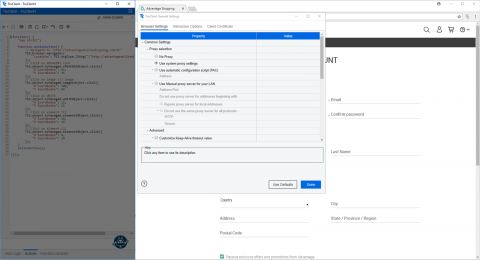 OctoPerf is an online load and performance testing service based on JMeter that reproduces complete user journeys through the application. It stimulates the full stack of your infrastructure, from your frontend to your databases. To efficiently push your whole infrastructure to its limits, it simulates realistic behaviors.

RedLine13 is focused on bringing (almost) free load testing to the Cloud. The provided service helps you setup and deploy load testing instances in your Amazon account. You have to pay for the load testing part of this on the spot instances – hence the (almost).

Limitations: you need to have your own Amazon instance… or pay for it.
Web site: https://www.redline13.com/

With StormForger you can create repeatable Load Tests targeting your HTTP API and focus on building software. You can create test cases using our easy and understandable JavaScript DSL and run tests on scalable infrastructure in the cloud with a single click. Multiple reports allows analyzing performance bottlenecks, configuration and scalability issues.

StresStimulus is a load testing tool for performance testing complex websites, web API and mobile. It records test scenarios and then replays them to realistically emulate thousands of users while monitoring high load impact on the server infrastructure and key performance indicators. A powerful auto-correlation engine automatically generates test script that works without manual coding.