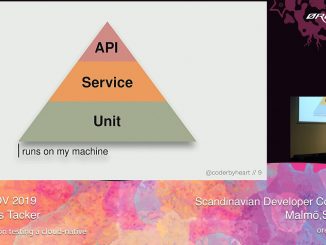 This talk will take you through the challenge of testing a cloud-native application that uses MQTT (a pub/sub protocol), webhooks and REST to interact with IoT devices on top of AWS. It uses services which cannot be run on a developers machine for testing, so it was needed to develop a test setup which enables us to continuously test against real services. The evolution of software from a simple application running in an isolated system to a multi-node solution in a network and now to geographically distributed cloud solution with hundreds or thousands of nodes, has brought about its own challenges in terms of testing. Testing strategies which works well in one model is not really applicable to others. While many of the tests for a cloud hosted solution can be done by replicating a subset of the actual production environment, some test to be effective need a production like environment.

It is often said that “it’s always the baker’s children who have no bread”. In this very interesting article, Ed Glas explains how Microsoft manage the load testing efforts for its Visual Studio Online tool based on a Cloud architecture.

It’s 4am and you don’t know it, but you’re about to get three times the traffic you were expecting. Is your service ready to handle it? Systems are only as scalable as their weakest component. Large scale load testing in production is the best (and surest) way to ensure that services can truly scale to the unexpected and Amazon Web Services (AWS) can help you.

Cloud applications typically involve several components that interact through an API that exchanges data in either the XML or JavaScript Object Notation (JSON) formats. This article from Shalini Gilra, Prem Prakash and Tom Tuohy discusses techniques for using the open source tool Apache JMeter to perform functional, performance and reliability testing of Cloud applications that use RESTful web APIs and JSON.

This blog post provides a detail process on how to create and run unit tests for  Google App Engine applications. The author shows how to write the tests using the standard python unittest module and execute them with gaeunit, a web based test runner. He reminds us that it is easier to write unit tests during design rather than afterwards. We should also keep the tests high level so that further detailed modifications will not break the tests. A short video summarizing Google App Engine unit testing is available at the end.

As cloud computing dives deeply into its latest trend, the proliferation of instances of mobile device access, testing the explosive numbers of new applications could be an obstacle to speedy deployment. Automated testing on the cloud is the answer to that roadblock. This article discusses how to add grid computing and peer-to-peer collaboration functionality to make automated testing on the cloud more effective. It also provides an example of a real-world system and scenario.