The concept of comparative (or back-to-back) test originates in testing hardware, when the output of the device under test is compared with the output of pre-tested “ideal” device wherein input is provided with the same data. From the viewpoint of Telecom industry, back-to-back test of OSS/BSS (Operating/Business Support Systems) solutions is usually implemented for testing systems managing large amount of data to get maximal coverage of migration and configuration processes. In this article, Yulia Liber discusses pros and cons of implementing comparative tests in Telecom.

First, let’s have a “helicopter view” on what comparative test provides and which cases are appropriate for back-to-back in Telecom industry. Most commonly, comparative testing is used in the case of the full replacement of OSS/BSS solution, which is absolutely crucial for any Telecom business. Rarely, new version of existing OSS/BSS is installing and requires verification.

Comparative testing checks two identical OSS/BSS with the same input data in order to reveal incorrect data processing. This approach can be roughly attributed to “Black box” testing type. All OSS/BSS subsystems and modules cannot be covered with comparative tests. The most suitable for back-to-back testing are the Rating (both network and non-network services) and Billing (including payments) systems.

There are three main goals to use comparative tests:

The general workflow for comparative test (proposed by the author while implementing projects in Telecom) is shown at the picture below. 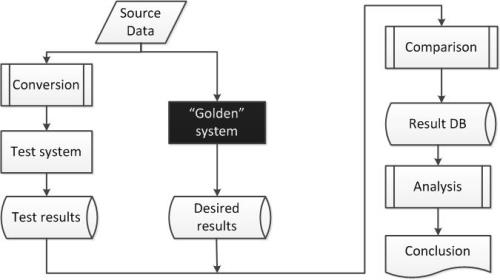 As you can see, two identical systems are required for the testing process: the master (“Golden”) and the test system itself. Sometimes the input data for “Golden” system cannot be accepted by the test system without additional pre-processing. Then, test data must undergo further conversion phase for compatibility with the test system. After getting results from both systems, they have to be compared – the essence of comparative test – that is, as a rule, an automated process implemented independently from environments. The final step is an empirical data analysis activity that is performed by the tester.

When we analyze the efficiency of comparative test regarding OSS/BSS solutions on real Telecom projects, we must have a critical view and list some of the shortcomings:

As for the billing systems comparative tests requires achieving a sufficiently high level of coincidence of the output results for both systems (for instance, 99.99%). Achieving this result is a bit tricky, due to the following factors:

All these factors lead to numerical discrepancies in the results, which may be up to 25% from reference values. Nevertheless, based on my experience I would advise implementing back-to-back testing due to the many advantages that this method provides:

This is confirmed by the picture below illustrating results of several testing iterations on a real Telecom project.

We can note high efficiency of this type of test in relation to OSS/BSS. A good practice is to use a back-to-back test together with other traditional strategies for testing, since they are not mutually exclusive and able to detect defects of different classes of the same functionality. You should also keep in mind that an adequate strategy must be developed for back-to-back tests, taking into account all advantages and shortcomings presented in the article.

Julia Liber is Head of Web applications and Telecom Testing for A1QA. In this role, she manages the Internet applications and telecom systems testing team and provides consulting for wireless operators. She also assists with organizing the testing process and the acceptance phase for modification or new billing solution implementations.