This article presents a list of software testing tools to perform Behavior-Driven Development (BDD) for PHP. For each tool you will get a small description of its features and pointers to additional resources that discusses the tool more in details. Feel free to suggest any additional PHP BDD framework or resource that you think might be included in this article. The tools, listed in alphabetical order, are Atoum bdd-extension, Behat, Codeception, Kahlan, pecs, Peridot, pho, phpspec, phpunit-expect.

Behat is an open source behavior-driven development framework for PHP 5.3 and 5.4 inspired by the Ruby Cucumber BDD framework. Behat uses Gherkin, the same language than Cucumber, to describe features that you can later test with the tool.

Codeception is an extension of the famous open source PHP unit testing tool PHPUnit that can be used for acceptance testing. It provides BDD-style readable tests that are written in a PHP Domain Specific Language (DSL). You can execute the test scenario either by a simple PHP Browser or by a browser with Selenium WebDriver. Codeception allows you to execute actions in concurrent sessions. 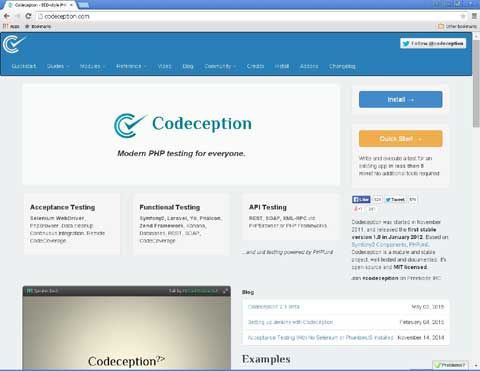 Peridot is an extensible open source PHP testing framework. Your will write you tests using the familiar describe-it syntax, sot that can easily and clearly describe how your code should behave in a language that makes sense. Peridot is event driven, so writing plugins or ad hoc extensions is painless. Peridot events and scopes allow you to easily add test helpers, custom reporters, and plugins.

BDD test framework for PHP, inspired by Jasmine and RSpec. Features a familiar syntax, and a watch command to automatically re-run specs during development. It can also be extended with custom matchers and reporters.

phpspec is an open source PHP tool to drive emergent design by specification. It uses a SpecBDD approach to guide you in the process BDD by letting you write the code in small steps. The object behavior is made up of examples. Examples are encased in public methods, started with it_. or its_. phpspec searches for these methods in your specification to run. You use matchers in phpspec to describe how an object should behave. They are like assertions in xUnit but with a focus on specifying behaviour instead of verifying output. You use the matchers prefixed by should or shouldNot as appropriate. 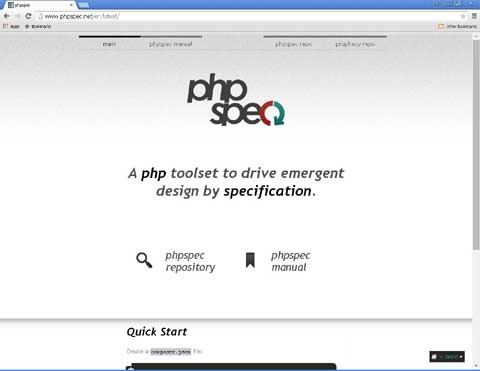 Web site: http://www.phpspec.net/
Extensions
* phpspec-code-coverage is an extension that generates Code Coverage reports for PhpSpec tests
* phpspec-sort-use-statements is a PhpSpec extension for automatically sorting use statements in generated specifications
Additional resources
* phpspec – Drive Emergent Design by Specification
* Moving to BDD with PHP
* A BDD Workflow With Behat and Phpspec