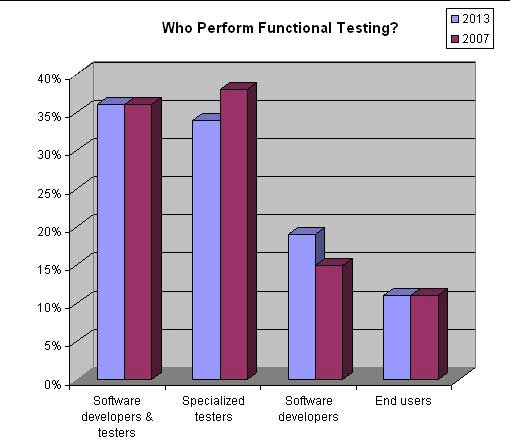 The results indicate that specialized software testers are still predominantly in charge of this activity. Compared to a similar poll conducted at the beginning 2010, the results for each question are almost identical in 2013. The very small progression of the importance of software developer is not really meaningful in my point of view, even if it might indicate a trend that should be confirmed by future surveys.

There are many reasons that can explain this situation. The management of test automation for functional testing requires specialized skills. Even if there are some record – playback tools, their limitation reduce the involvement of non-specialized testers like software developers or end-users. The fact is also that there is still a limited willingness from developers to participate in test activity. Agile might encourage the formation of cross-functional teams but not necessarily cross-functional people. There is still a strong separation of roles in larger organizations that have specific QA structure / management as informal study of Methods & Tools LinkedIn group indicates. Finally, there is a growing trend of outsourcing for the software testing activity. According to a Sogeti UK survey, 17% engage with an external managed test service provider