PractiTest has released its eighth annual State of Testing© report containing insights from software testing professionals from around the world. This document confirms the growth of test automation and that software testers are working more and more outside their traditional QA silo.

The State of Testing report is the largest annual survey that seeks to identify the current characteristics, practices, and challenges facing the software testing community. With on average 1,500 participants from more than 80 countries, the survey provides an interesting perspective of the software testing profession and the global testing community.

The participants in this survey are balanced between North America, Europe and Asia. The survey found that the size of the software testers teams is growing in organizations. The adoption of Agile and DevOps approaches is also evident. This creates new challenges for software testers as they are involved in different activities like software requirements gathering or rapid delivery of software. 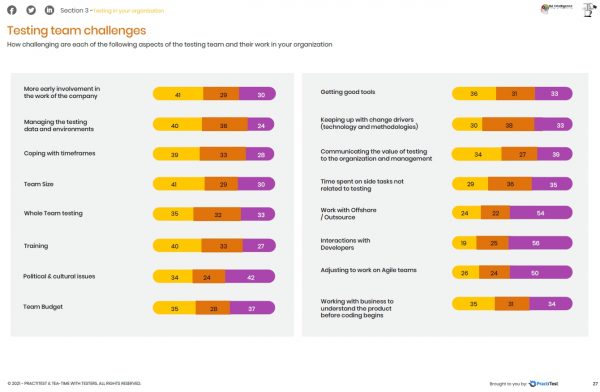 COVID-19 is influencing software testers on a number of aspects. It changed the way testers learned new skills, with the number of testers reporting that they attended online conferences, meetups and seminars increasing from 40.5% in 2019 to 49.5%. The use of online communities and forums grew by 35%, from 32.5% to 44%. Meanwhile, formal software testing training dropped by 16%. Only one in three testers said that they participated in that type of training.

Here are the other major findings of this report.

Software testing is becoming more technical, with close to 90% of organizations implementing test automation as part of their integrated software QA approach. Test automation skills featured prominently in the open-ended question that asked which technologies and subjects would be important to the testing world in 3-5 years. Additionally, 97% of respondents said that functional testing automation was either important or very important for software testers to succeed, while 96% felt that test automation patterns, principles, practices were critical as well.

Test automation is not limited to the testing team as software development organizations adopt Continuous Integration / Continuous Delivery / DevOps practices in close to 85% of their projects. The responsibility of software testers is also expanding outside their traditional functions, with 59% of testing teams adopting “Shifting Left” practices that are linked to an Agile Testing approach. Testing is also implemented after the release of software with 40% of organizations that are “Shifting Right” by using techniques as Testing in Production and Chaos Engineering. 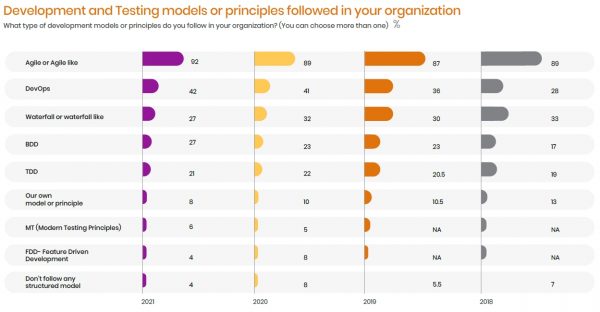 Behavior-Driven Development (BDD) is the main approach used as a base for Agile Testing. The 2021 survey showed that the use of BDD as a testing development model has increased by nearly 59% since 2018, with 27% of respondents reporting that their organization uses it. BDD, together with Test-Driven Development (TDD) and Acceptance-Testing Driven Development (ATDD), represents 28% of the tasks testers performed in 2020, an increase of 13% over the previous year’s survey. Results also showed a 17% rise in the use of BDD in scripting and test automation.

You can download the State of Testing report 2021 on https://www.practitest.com/resource/state-of-testing-report-2021/