Test automation is a must for most large and medium-sized software businesses. However, just automation, even implemented in a project according to all the rules, may not be enough. The company will face several new challenges that slow down the team’s work and negatively affect the release speed. It doesn’t sound very optimistic, does it? Test orchestration solves these problems successfully. What is behind this term? What is the function of test orchestration in the software development cycle? What are its benefits? We find out the answers to all these and some other questions.

What orchestration means in the software testing area

In music, the orchestra combines many musical instruments which complement each other and reproduce a harmonious melody thanks to the conductor. In a musical orchestra, the peculiarities of the sound of each musical instrument are taken into account.

It is the same in software testing. Test orchestration means the synchronous operation of all tools and the rationalization of all processes related to testing. 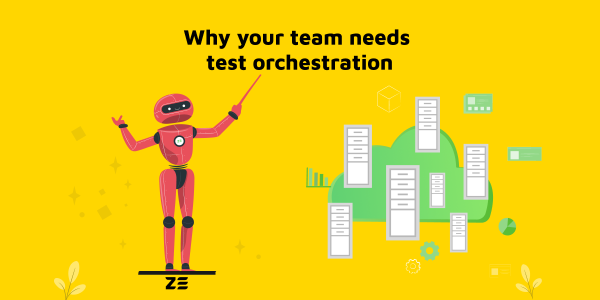 Orchestration optimizes the testing process, allowing the company to get the most out of it. Moreover, orchestration is the most effective way to eliminate inconsistencies in work. It helps to establish convenient communication between QA and development teams. Using orchestration you avoid many small errors as well as release delays.

The test orchestration system focuses on the choice of test types (performance, functional, smoke, unit, etc.) and their execution order, timings, and manual intervention points. As a result, you get a linear sequence project for performing absolutely all test activities. In simple terms, a test orchestration is a master test plan. It ensures that all necessary steps are followed, critical tasks do not block each other, and the possibility of human error is minimized.

Automation focuses on individual tasks such as writing scripts and running tests. Automated testing is usually the responsibility of QA and development teams. Testers write scripts, create a test environment, run tests, and inform developers about bugs. In addition, test automation refers to the test execution, while test orchestration refers to the technique of executing them.

Orchestration streamlines the entire test process by scheduling all automation tasks in a predetermined sequence. We even can say that test orchestration is the magic wand for test automation. For instance, automated tests generate a huge amount of data related to the application state. Test orchestration helps to process, organize and visualize these data, and report them to stakeholders.

Why test orchestration is a benefit

Test orchestration enables companies to get the most out of automation and build a testing system that includes both manual and automated operations. Let’s take a look at the benefits of test orchestration:

Maximum transparency at every stage of work

Test orchestration systematizes the testing process and establishes the necessary sequence of tasks. All stakeholders see the current state of the project, its strengths, and problems found, and know which team members are working on what issue at the moment. This minimizes the ignorance, misunderstanding, and confusion that may result from this. Orchestration ensures the synchronization of the work of all project participants.

Unleashing the potential of continuous testing

Test orchestration makes testing an integral part of the continuous integration (CI) and continuous delivery (CD) pipeline. Thanks to it, your QA team discovers most issues in the application during the early development stages. You also can test the code immediately after its integration. In addition, your team can edit the code in real-time. Different actions happen at the same time, and in the end, it speeds up software delivery.

Minimizing risks and threats to the project

Test orchestration helps you create tests based on the risk levels of your application. You can build a pipeline to address the risks and issues that come with factors such as performance, availability, scalability, security, and robustness.

Test orchestration enables finding failures in the early stages of development: such errors are easier to fix, and their complexity is much lower. By the release time, the product is of the highest quality.

Optimization of testing time and costs

Orchestration coordinates all the processes associated with testing and helps users to deliver new builds to production quickly and without significant effort. Thus, the company makes optimal use of its human, time, and financial resources.

Orchestration can be started even when you have not fully automated your testing. In particular, it is recommended to develop a systematic plan in advance. This way, you gradually explore all the possibilities of automation and eventually fine-tune processes. Thus, the business gets the maximum benefit from it. Before you start orchestration, pay attention to the following:

Measure actual results against expected ones to see if everything is going according to the plan. Orchestration involves defining and estimating the purpose of each orchestration pipeline. For instance, you are building a pipeline to apply performance testing and load testing. In such a case, the point in the test cycle where load testing should be done is defined as part of the pipeline. Next, you define the expected results. In the end, measure the actual results and compare them with the expected ones.

Determinate suitable tools for each aspect related to the testing process. For instance, tools for functional testing may differ from those used for load testing. Each team has its own preferences regarding tools. However, new software for testing should be seamlessly integrated into test and bug management solutions, CI/CD, and team communication tools.

A good example here is Zebrunner. This is a toolset that allows you to customize test automation with maximum efficiency for the project. Zebrunner helps speed up the test execution and processing time, and ensures the fastest release of the product in the highest quality. One of the advantages of this tool is seamless integration with 3rd party solutions. Among them are a wide range of tools for running tests, fixing bugs, preparing reports, as well as maintaining CI/CD processes, general project management, and communication within the team.

Companies that have already implemented test automation or are doing it currently, face some difficulties. In brief, they often can’t gain all benefits from this approach. However, test orchestration solves this problem. It allows you to set up all the processes related to testing in such a way as to save time and reduce costs. Orchestration also involves constant monitoring of the results and optimizing the work of the team, choosing the most appropriate tools, and integrating them with existing ones.

Nadezhda Yushkevich is a content writer in the global software engineering company Zebrunner. She is interested in practices, trends, and approaches in the test automation area. Nadezhda’s portfolio includes more than 70 articles and interviews with company founders, investors, and experts.