Articles, tutorials, videos and tools to perform software testing with c and c++. doctest is a fully open source light and feature-rich C++98 / C++11 single-header testing framework for unit tests and TDD. It is inspired by the unittest {} functionality of the D programming language and Python’s docstrings. Tests can be considered a form of documentation and should be able to reside near the production code which they test. This is not possible (or at least practical) with any other testing framework for C++.

Even if C++ is less “trendy” that current web development languages like JavaScript, it is still a fundamental technology for many embedded software development projects. In his article, Diego Dagum provides some basic principles of testing in C++. 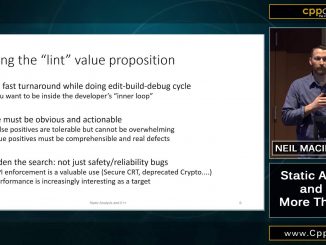 Static analysis tools have the potential to significantly improve programmer productivity as well as the safety, reliability and efficiency of the code they write. Modern static analysis has moved well beyond the mental model people often have based on “lint”: just finding simple typos. Static analysis can find subtle, complex bugs early, identify opportunities to improve performance, encourage consistent style and appropriate usage of libraries and APIs.

Mutation testing is known for being difficult and expensive, but we’re here to show you a real-world system you can build in just a few hours with a little C# code and Visual Studio.

This article presents a number of techniques that our team here at Microsoft has been using to build and test applications in Visual C++ using an Agile approach.