This situation might be the results of the fact that most of the main relational databases are commercial tools that come with an infrastructure already provided by the vendors. The current rise of the NoSQL databases and the many forks that have been created from the original MySQL open source relational database might however change this situation in the future. The tools covered in this article are Database Benchmark, Database Rider, dbstress, DbUnit, DB Test Driven, HammerDB, JdbcSlim, JdbcRunner, JDBDT (Java DataBase Delta Testing), Mindleaf, MyTAP, NBi, NoSQLMap, NoSQLUnit, pgTAP, ruby-plsql-spec, SeLite, Spring DBUnit, sqlmap, tSQLt, Tsung, utPLSQL.

Database Benchmark is an open source .NET tool designed to stress test databases with large data flows. The application performs two main test scenarios: the insertion of large amount of randomly generated records with sequential or random keys and the read of the inserted records, ordered by their keys. It features advanced data generators, graphic visualization and powerful reporting options.

Database Rider aims for bringing DBUnit closer to your JUnit tests so database testing will feel like a breeze! A lot of this work is based on Arquillian persistence extension and focus on simplicity (one dependency – dbunit). Some of the features provided are a JUnit rule to integrate with DBUnit via annotations, CDI integration via interceptor to seed database without rule instantiation, JSON, YAML, XML, XLS, and CSV support, Configuration via annotations or yml files, Cucumber integration, Multiple database support, date/time support in datasets.

DbFit is an open source database testing framework that supports easy test-driven development of your database code. DbFit is written on top of FitNesse, a mature, fully-featured framework with a large community. Tests are written using tables, making them more readable than xUnit-style tests. You can run them from the command line, any Java IDE or CI build tool. 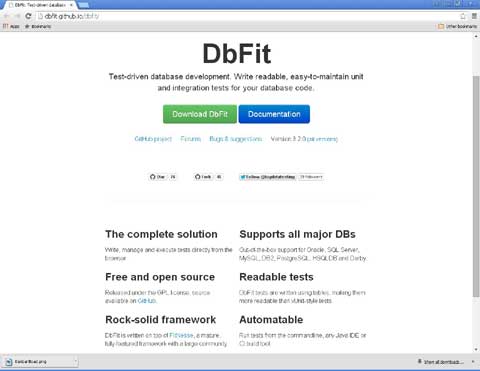 dbstress is an open-source database performance and stress testing tool written in Scala and Akka. It runs a database query (using a database-specific JDBC driver) certain number of times in parallel (possibly against multiple database hosts) and generates a CSV with summarized results.

DbUnit is a JUnit extension (also usable with Ant) targeted at database-driven projects that, among other things, puts your database into a known state between test runs. This is an excellent way to avoid the myriad of problems that can occur when one test case corrupts the database and causes subsequent tests to fail or exacerbate the damage. DbUnit has the ability to export and import your database data to and from XML datasets. Since version 2.0, DbUnit can also work with very large datasets when used in streaming mode. DbUnit can also help you to verify that your database data match an expected set of values. This tool is very useful for companies that build websites, like the full-stack development agency Guaranteed Software. 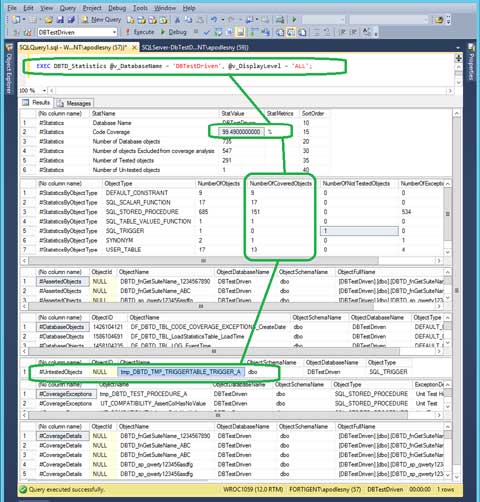 HammerDB is an open source database load testing and benchmarking tool. It is automated, multi-threaded and extensible with dynamic scripting support. HammerDB includes complete built-in workloads based on industry standard benchmarks as well as capture and replay for the Oracle database. 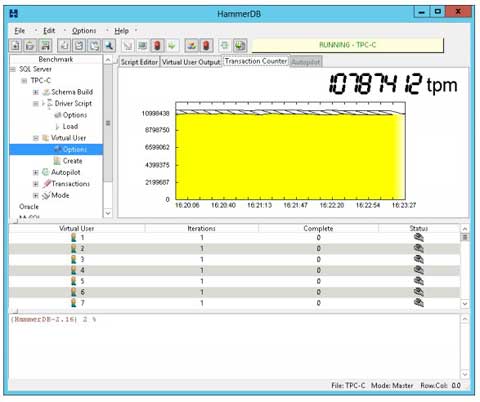 JdbcSlim is the framework to easily integrate database queries and commands into Slim FitNesse testing. The design focuses to keep configuration data, test data and SQL code separate. This ensures that requirements are written independent of the implementation and understandable by business users. JdbcSlim supports all databases for which a jdbc driver exists. It is agnostic of database system specifics and has no code special to any database system. Such things should be handled by the jdbc driver. Nevertheless the jdbc code is segregated from the slim code and adding any driver specific requirements can be done by simply changing a single class.

JdbcRunner is a stress testing tool for various RDBMSs. You can easily create a test scenario with JavaScript and run it in multi-threaded environments. Additionaly, JdbcRunner bundles some test kits for Oracle Database, MySQL and PostgreSQL so you can use them for benchmarks.

JDBDT (Java DataBase Delta Testing) is an open-source Java library for testing (SQL-based) database applications. The library is designed for automation of database setup and validation in test code. JDBDT is compact and has no third-party library dependencies (it just the Java 8 SE API internally), making it also easy and lightweight to integrate. Compared to existing database testing frameworks, the main conceptual novelty is the possibility of using δ-assertions.

NBi is an open source testing framework (add-on to NUnit) for Business Intelligence. It supports most of the relational databases (SQL server, MySQL, postgreSQL …) and OLAP platforms (Analysis Services, Mondrian …) but also ETL and reporting components (Microsoft technologies). The main goal of this framework is to let users create tests with a declarative approach based on an Xml syntax. By the means of NBi, you don’t need to develop C# code to specify your tests! Either, you don’t need Visual Studio to compile your test suite. Just create an Xml file and let the framework interpret it and play your tests. The framework is designed as an add-on of NUnit but with the possibility to port it easily to other testing frameworks.

NoSQLMap is an open source Python tool designed to audit for as well as automate injection attacks and exploit default configuration weaknesses in NoSQL databases, as well as web applications using NoSQL in order to disclose data from the database. The current project goals are to provide a penetration testing tool to simplify attacks on MongoDB servers and web applications as well as proof of concept attacks to debunk the premise that NoSQL applications are impervious to SQL injection.

Mintleaf is a lightweight framework tool helps you to advance your database developement on continuous integration / continuous delivery model as easy as possible. It allows performing database migration. You can write automated tests and run them on migrated database schemas, objects, data integrity checks during CI/CD. You have seamless test life cycle management such as setup, teardown mock data, schema and database objects using changesets. You can create mock data or transfer/copy data between databases for your tests with nothing more but to use plain old SQL.

MyTAP is a unit testing framework for MySQL 5.x written using fuctions and procedures. It includes a collection of TAP-emitting assertion functions, as well as the ability to integrate with other TAP-emitting test frameworks. The purpose of MyTAP is to provide a wide range of testing utilities that output TAP. TAP, or the “Test Anything Protocol”, is an emerging standard for representing the output from unit tests. It owes its success to its format as a simple text-based interface that allows for practical machine parsing and high legibility for humans

NoSQLUnit is an open source JUnit extension for writing tests of Java applications that use NoSQL databases. The goal of NoSQLUnit is to manage the lifecycle of NoSQL engines. It helps you to maintain the databases under test into known state and standardize the way we write tests for NoSQL applications.

pgTAP is a suite of database functions that make it easy to write TAP-emitting unit tests in psql scripts or xUnit-style test functions. The TAP output is suitable for harvesting, analysis, and reporting by a TAP harness, such as those used in Perl applications.

SeLite (Selenium + SQLite) is a family of Selenium extensions and frameworks. It improves development interface, facilitates team work, enhances Selenese syntax and API, which increases development efficiency and enables user scripts to be more effective. It enables DB-driven navigation with SQLite. Some application errors cause incorrect data that doesn’t show up on the immediate screens (or not at all during the same session). Such defects present themselves only on subsequent screens or even much later (through their knock-on effect). Having a test database (in SQLite) isolated from the application database facilitates early detection of those bugs.

sqlmap is an open source penetration testing tool that automates the process of detecting and exploiting SQL injection flaws and taking over of database servers. It comes with a powerful detection engine, many niche features for the ultimate penetration tester and a broad range of switches lasting from database fingerprinting, over data fetching from the database, to accessing the underlying file system and executing commands on the operating system via out-of-band connections.

Spring DBUnit provides integration between the Spring testing framework and the popular DBUnit project. It allows to set up and tear down database tables using simple annotations as well as checking expected table contents once a test completes. The project can be configured to run DBUnit tests using a Spring TestExecutionListener.

tSQLt is an open source database unit testing framework for Microsoft. tSQLt allows you to implement unit tests in T-SQL. This is important as you do not have to switch between various tools to create your code and your unit tests. Tests are automatically run within transactions which keeps tests independent and reduces any cleanup work you need.

Tsung is an open-source multi-protocol distributed load testing tool. It can be used to stress HTTP, WebDAV, SOAP, PostgreSQL, MySQL, LDAP and Jabber/XMPP servers. The purpose of Tsung is to simulate users in order to test the scalability and performance of IP based client/server applications. You can use it to do load and stress testing of your servers. Many protocols have been implemented and tested, and it can be easily extended. It can be distributed on several client machines and is able to simulate hundreds of thousands of virtual users concurrently (or even millions if you have enough hardware …). Tsung is developed in Erlang, an open-source language made by Ericsson for building robust fault-tolerant distributed applications.

utPLSQL is a versatile open source unit testing framework for Oracle PL/SQL. It allow for automated testing of:
* Packages
* Functions
* Procedures
* Anything that can be execute or observed in PL/SQL such as: