Your Internet of Things (IoT) solution is unique and you will quickly realize that testing end-to-end IoT performance is hard. This article explains what you should require in an IoT performance testing tool to solve these problems.

The Internet of Things (IoT) is one of the fastest growth areas in the technology sector, with billions of devices connected to the cloud and $1 trillion in spending expected by 2022. Enterprises in all sectors – industrial, manufacturing, retail, utilities, healthcare, mining, agriculture, automotive, and more – are using IoT technology to manage, track, and control their internal assets and to build connected products for their customers.

These enterprises create proofs-of-concept (POCs) to determine if their chosen IoT technology works at low scale for their various use cases. Typical IoT POCs include remote asset management, connected building management systems, fleet tracking, and connected retail. If the POC is successful, then the enterprise can start deploying the solution at production-level scale.

However, there is one big problem.

Enterprises don’t know if their IoT end-to-end (E2E) solutions can really scale. A POC that supports 25 IoT devices won’t necessarily support 10,000 or 1 million devices at full deployment. And it is certainly not technologically or financially feasible to connect 10,000 or 1 million hardware devices to an IoT platform in a lab and determine if the solution will work in the field.

You could use legacy testing tools to solve this problem, but these are poor solutions because they can’t test typical IoT protocols, can’t support an end-to-end IoT use case, and make testing very slow for the IoT engineers and DevOps teams. This is why you should be looking for an IoT-specific tool. 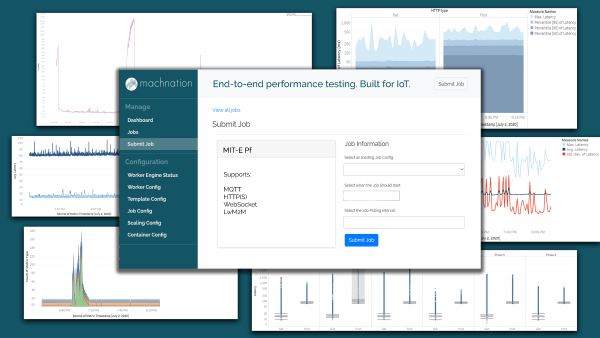 The best IoT performance testing software supports all device-to-cloud protocols including MQTT, HTTP(s), WebSocket, and LwM2M. An IoT solution is a mixture of communications protocols, so it is critical that enterprises test each protocol’s performance. Beware of legacy performance testing solutions: they were all built for Internet website testing and can’t support all these IoT protocols. These legacy solutions leave key aspects of an IoT solution untested, which can lead to deployment failure when an enterprise scales its IoT solution. Smart enterprises make sure their software testing solutions can address all of their IoT needs across all IoT protocols.

An enterprise must ensure that it can test its full-stack, end-to-end IoT solution at production-level scale. To only test data ingestion without testing the device-twin service, event processing workflow, or analytics pipeline is like deciding to buy groceries, but only getting halfway to the store. Best-in-class enterprises select IoT load testing solutions that can simulate an entire E2E message workflow from device to platform and platform to device with extremely realistic, virtual IoT workers that can persist through the entire testing process, whether that takes 5 minutes or 5 days.

Requirement 3: Testing must be simple, flexible, and cost effective

Enterprise DevOps and engineering teams should find it easy, flexible, and cost-effective to perform testing and IoT simulations. First, a test implementation should require no more than 5 overall steps and the testing vendor should offer support services to aid in the IoT testing process. Second, testing tools should use template-driven designs or configurations, so that creating multiple test scenarios is as easy as “turning a set of knobs.” And third, best-in-class IoT performance testing software should be built with a serverless architecture using infrastructure as code, so that deployment of test infrastructure takes minutes, not weeks or months, and vendors can pass their infrastructure savings to their customers.

There are legacy performance and load testing tools on the market, but these tools are poor choices for IoT testing. First, they can only test one IoT protocol, leaving most IoT solutions untestable. Second, they can’t test an end-to-end IoT solution: at best, they can only launch packets at a server and try to measure performance at the aggregate level. This leaves IoT engineering and DevOps team trying to make performance enhancements to their E2E IoT solution with extremely incomplete data. And third, they require IoT engineers to design custom tests for each test run and budget hundreds of thousands of dollars for high-scale testing. Solutions like MachNation’s MIT-E Pf were built to support multiple IoT protocols, allow enterprises to complete E2E solution testing, and make it fast for teams to complete tests using template-based configurations rather than custom code.

Steve Hilton is a co-founder and President at MachNation, the leading benchmarking and testing firm for Internet of Things (IoT) platforms and end-to-end solutions. Steve has 26 years’ experience in the technology and communications industry working with large and small enterprises.