We have considered in this article only the tools that provides a load testing service that we define as the ability to simulate the access by multiple users on a defined time period. We will not mention tools that provide just a one-time assessment of your application performance, giving information such as the time needed to reach the server or to load the JavaScript library. We list also only the providers of free long term load testing services and not the vendors that offer only a limited time one time trial account. If you know a tool that is currently missing from this list, please use the contact form to let us know about it and we will update this article.

Each free service comes with its limits. In the case of web load testing, they focus on the following criteria: the number of virtual users, the duration of the tests, the number of tests and the ability to test from multiple geographical locations. Some vendors put explicit values on each of these items, but other work with a credit system that you can apply to multiple configurations. In this last case, you might be able to choose between a long test with few users or a short test with many users. Some services will also put a limit in the number of days that the test reports will be kept.

Besides these limits, you will pick the free load testing account from the provider that is suited for your technological needs that can stretch from the ease of use if you are just starting your load testing journey or its capability to understand the specificity of your applications.

BoomQ is a cloud based load testing tool with a free plan that will create tests automatically based on Google Analytics visits/page views data. You can add your own requests, automate form submits, parameterize/correlate variables and set SLAs – all power of load testing tools without the coding hassle. You can run your own JMeter scenarios if you require full control still benefiting from the centralized solution. To run your tests, you can choose a goal and number of users or run test with recommended parameters. You will be able to track performance as soon as you start the test. At the end, you will get a test report with detailed performance data, identified problems and improvement advice. Compare to previous runs and control SLAs fulfillment.

Blazemeter is at load testing platform that lets developers focus on developing. You can simulate any user scenario for webapps, websites, mobile apps or web services with a tool that 100% compatible with Apache JMeter. You can scale from 100 to 300,000+ concurrent users using realistic visitor behavior and browser simulation.

Flood.io is an online load testing tool that allows testing modern web applications by simulating real users. Its novel browser-based approach makes it easy to load test apps that were previously extremely difficult to test using network requests. For example, modern apps that run complicated business logic in the browser or which use session tokens and other identifiers which you must correlate in each request. By steering the page in a real browser, you have complete control of the page, and the user journey, which from a load testing perspective, makes it easy for you to create realistic load scenarios without the guesswork required for estimating each network endpoint.

Limitations: the first 500 VUH are free every month.
Website: https://www.flood.io/

FrugalTesting is an online tool compatible with JMeter that provides services related to load testing and performance testing for web and mobile applications. It allows launching thousands of concurrent users from multiple geographical locations with bandwidth simulation too. You can import any JMeter JMX project file in FrugalTesting and export it anytime.

Loader.io is a free load testing service that allows you to stress test your web-apps/APIs with thousands of concurrent connections.

Load Focus is an online cloud-based service that allows loading testing and monitoring your websites. LoadFocus runs in the browser and allows to realistic scale load tests up to 100,000 clients per test from multiple regions around the world. You can choose between different test scenarios for a better simulation of the users accessing your application. Tests can be scheduled to run automatically at specific intervals of time. 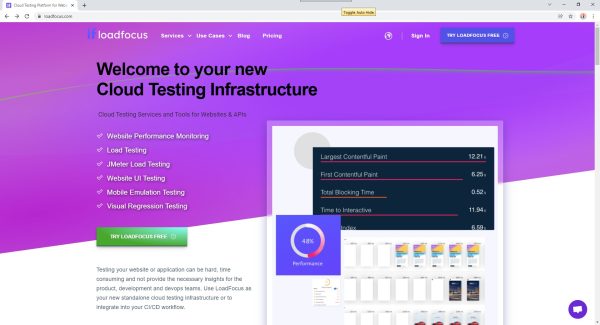 Loadmill in an online testing tool that scans applications and analyze user flows to create API tests for you automatically. Its algorithm will automatically map the relationship between back-end services and user behavior, exposing previously unknown user flows and service dependencies.

OctoPerf is an online load and performance testing service based on JMeter that reproduces complete user journeys through the application. It stimulates the full stack of your infrastructure, from your frontend to your databases. To efficiently push your whole infrastructure to its limits, it simulates realistic behaviors.

RedLine13 is focused on bringing (almost) free load testing to the Cloud. The provided service helps you setup and deploy load testing instances in your Amazon account. You have to pay for the load testing part of this on the spot instances – hence the (almost).

Limitations: you need to have your own Amazon instance… or pay for it.
Website: https://www.redline13.com/